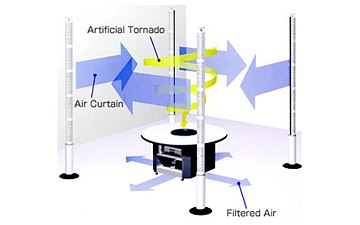 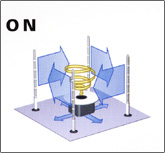 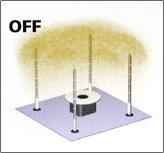 When air curtain blows continually from 4 pillars in the same rotating direction, revolving current will be generated which in turn generate centrifugal force for the molecules in the air. Subsequently, suction is executed from the upper or lower section of the center, and with the intensity of the revolving current and the volume of suction air being balanced, the suction area created by suction will form a core section along the central axis. This core section of suction generated centrifugal force for the molecules in the air. When the centrifugal force and the centripetal force are made equal on the circumference of the core, the revolving current will grow into a swirl (spiral flow) and converge at the central core. As a result, an artificial tornado directed towards the suction opening will be generated. An artificial tornado, formed using this method, can be freely created into low-speed tornado, one that man is unable to sence, or one that is strong enough to blow away a big hammer. Air curtain blows 4 pillars in the same rotating direction and is sucked downward into the central section of the table to generate downward artificial tornado. Tobacco smoke will be sucked by the artificial tornado, filtered through the Electrostatic Precipitator and the deodorizing filter built into the table, and filtered air is released from the bottom part of the devices.